What do I get out of running? I realized (or at least reaffirmed) the answer a couple weekends ago at the Lake Sonoma 50 Miler. I get mental strength. Sure the physical conditioning is great but the mental stamina and fortitude is what keeps me going. Lake Sonoma 50 is a TOUGH race. It's a rough course, w some major climbs and descents and lots of rolling hills. There is really no flat/gentle areas of the course. I ran it 10:20 but was really hoping and very confident that I would break 10. I made the biggest rookie mistake, I went out too fast. It was deliberate though but I'm not sure if that makes its more or less of a mistake. I had run the course in one direction, on very tired legs in a casual 5:15. With a 2 week taper I was certain that I could push it to the turn around (it's an out n back) and cruise back in 5/5:15. I didn't account for how relentless that course is.

I pushed way too hard for the first 12 miles. So much so that I actually started bonking around mile 15. By time I hit the turn around I was thinking about calling it a day (something I had never seriously considered in a race before). I collected myself at the turn around and set out slowly. I started cruising along the rollers as best I could before the steep descent down to lake level. I must have been passed by about 20 people through this section. I was moving but hurting from the turn around through about mile 34. Finally, life started to comeback to my body and mind. I thought this would be an eleven hour race leaving the turn around. I felt my energy reserves stocking up as a held a very conservative pace. As I pressed on I started to reel in a few people who had passed me.

As I neared the aid station around mile 38 mile, I decided I would kick in to gear after that. I got some good solid food down (side note: I was recently given some samples of Yaff Bars. I've been using them on training runs and they're pretty great. Quality ingredients and also awesome because you can share them w your dog! check 'em out: http://www.muddandwyeth.com/yaffbars.html), a bit of caffeine, mixed a Hammer Perpetuem into one of my bottle and turned the head phones way up. I immediately passed 4 or 5 more people and was moving at a good pace and passed up another 6 or 7 before the finish.

I think a big part of my problem was that I set my goal and focused on the (ridiculous) split too much. When I started to break down and realize that I wasn't going to get in under 10 it was a big mental bummer. As I pushed along in the later miles, I switched my thoughts to feeling really proud for staying in the race and tried to enjoy the small personal comeback I was experiencing.  As I crossed the finish line, I was elated to be finished but more importantly I realized why I love running ultras so much.

It took me a while to get this review out because of the Boston Marathon bombing a couple days after the Lake Sonoma race. Running has been my escape, the thing I do when I want to feel free and clear my head whether its a race or just a solo run. Now we have some f$&^%rs bombing the finish of a marathon!? This deeply affected me. The irony of people having just ran 26.2 miles and others losing there legs was terrible. I started to reflect on running, my race, what makes us runners and why we run. On a deeper level it was very strange for these b*&^hes to bomb a running event. Their cowardly weak act contrasting with the mental and physical strength of the runners and the positive vibes from all those who supported their runners and the event. If anything this bombing has driven me to live an even "free-er" life than i have been living, to run stronger than ever and most importantly to just keep running. 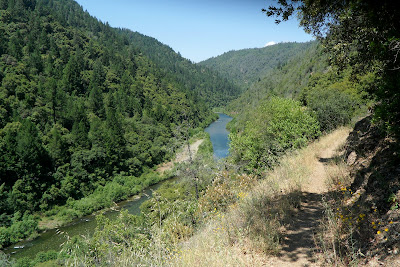 This weekend I linked up with a running group from the Auburn, CA area and ran 36 miles on the Western States course (an Out and Back from Drivers Flat/River Crossing up to Foresthill and back). Last weekend I ran the Lake Sonoma 25 mile training run and the weekend before that I ran Way Too Cool 50K. I'm feeling really strong and loving all of the miles on the trails I've been able to get in. Feeling a little bit tired but not too bad. For the past 4 weeks I've been getting about 60-70 miles per week in.

This weekend's 36 miler concluded Phase I of my Western States training and also marked the peak for my Lake Sonoma 50 training. I'm beginning a mild taper which pretty much means I'll be running quite a bit but cutting the long weekend runs down a bit. The week before Lake Sonoma will be filled with a lot of rest. Phase I's focus was to build a really solid running foundation that would handle high mileage as well as speed work/hill repeats, a bit of cross training and allow me to be prep'd for Lake Sonoma.

I had incredible luck with Ultra lotteries this year and got into Way Too Cool 50k, Miwok 100k and Western States (I know, I should buy a real lottery ticket!). I decided to run a fast Way Too Cool but not really taper, race Lake Sonoma, use Miwok 100k as a training run and ultimately focus 100% on Western States. I'm looking forward to Lake Sonoma. It's a TOUGH course but I am eager to give it my best shot and hopefully break 10hrs. I'm looking to run a smart race and run the last 15/20 miles hard. This race will be mostly some mental training for Western States.

Overall I'm feeling solid and looking forward to going to deeper into the belly of the Western States training beast. Oh yeah, let's talk a little about gear... I've been running mostly in Hoka One One Stinson trail shoes (i have 2 pairs that I rotate) and Altra Superior shoes. The combo has been excellent so far. I've been trying to figure out my hydration technique for WS so I've been running w 2 20oz Amphipod handheld bottles and occasionally using my Salomon S-Lab Hydration Pack. I've also been using a hydration waist pack w my 2 handhelds which seems to be an ok combo as well.

Also, if you live in the Bay Area or are visiting the SF/Marin area be sure to stop by the San Francisco Running Company. It's an awesome new running store w great/knowledgable guys running the shop and excellent gear, shoes, fuel, etc.
4 comments:

Back on the Trail

...to where? I don't think anyone knows but it's not about the destination... it is about the journey. Any true runner worth their salt (and we know how valuable salt is in running) will tell you the same. Signing up for races or having a running schedule that you can stick to is a beautiful part of running. Even on your way to a finish line you know it is not the end. It allows you to tune-in and subsequently tune-out (or maybe i should call it, "hit the zone") whether it is on a single run or extends through a stretch of time and multiple runs/races or training.

In November, I started thinking about races for 2013. I put my name in the lotteries for the Western States 100, Miwok 100k and Way to Cool 50k.  I also set my alarm and signed up for the Lake Sonoma 50 Miler when registration opened. The stars must have aligned for me for 2013 because I got picked in all 3 lotteries! Having all of these races on my race calendar for 2013 is electrifying. I have set long and short term goals and it provides fuel for every run.

One of my favorite long term goals for 2013 is to try to enjoy all of the training runs and workouts. Running is something that I love to do and in training for races in the past I have sometimes felt that "getting in workouts" has stressed me out. I believe that enjoying the process, the journey, and not getting stressed out over having to do certain workouts will allow me to be better prepared and actually train smarter and run harder than before.

Being back on the trail is more of a mental thing than anything else. I feel free, clear headed, strong and ready to tackle challenges.
No comments: