On May 12, 2012 I ran the QUICKSILVER 25 km race near San Jose in the Almaden Quicksilver State Park. This race is a small part of the well known Quicksilver 50 Mile Race which is also held on the same day. The race was well organized. There were about 100 people in the 25km.

It starts out with some steep climbs for the first couple miles on fire trails. Note that this part of the trail is pretty exposed to the sun. After those first couple miles you start to hit some downhills and then a steep long drop to the turn off onto the single track. This portion of the trail is rolling hills covered with oak trees.  This was a welcome respite from the sun especially since it was a warm day. I think by 9am it was almost 70. Being a San Francisco runner warm weather always beats me up a bit so I pulled the already drenched shirt off once we got into the shade and it remained off for most of the race. I felt a little off on this race because I had a pretty soar throat during the few days before. On race morning it was still bugging me a bit but not enough to stop me from running. Nevertheless, I never felt 100% and think I was feeling the effects of the heat a little more than usual because of this.

I rambled on through the rolling hills and popped out to another fire road. This fire road featured a steady and unwelcome climb with some additional hot spots near the ridges. There is a major cross roads of the 50 miler, 50km and 25km at the Western States Aid Station which was extremely well stocked. This was sort of a cool junction to see the other runners out there on different races. A nice lady pointed me in the right direction and I was off again more fire roads. These next few miles were the hottest of the race and it really took its toll on me. My pace dropped significantly and I just flat out didn't feel very good. I finally popped out to another aid station 1 mile from the finish. I still took some time here and filled up the bottle again and noted to put some ice in this time. I took off on the last mile which is some very steep downhill straight to the finish. I finished slower than I expected in 2:40. After reviewing the race results from prior years it seemed like the warm weather took its toll on everyone.... that mad me feel a little better :) Here's me crossing the finish line, done but stoked to be there! It should be noted that my soar throat did not survive the race... when it doubt run it out. 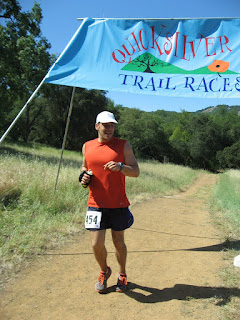 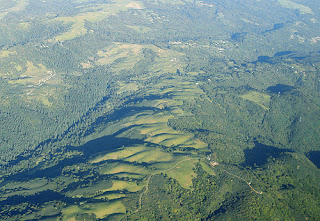 I've been making it a point to get outta the city and hit the beautiful hilly trails that surround us in the San Francisco Bay Area. This time of year the weather is great, wild flowers are popping and the trails aren't quite so saturated with the summer crowds.

Last weekend I embarked on what I have since dubbed "The Dot Com Death Run", a 15 mile run with 4200' of elevation gain and descent.  Don't steal that name race directors! I might use it and start my own race with that one day. I picked the MONTE BELLO OPEN SPACE PRESERVE (photo above)... I was actually on my way to Portola Redwoods State Park but I saw the Monte Bello parking area and decided to check it out. I had a map of the area in my hiking book so I felt comfortable to get out there and explore. Once I parked I realized I had only brought one large bottle of water and only two 12oz Amphipod Bottles and there was nowhere to fill up on the run or in the parking lot. Shit. The last store I saw was about 30 minutes earlier. I had some salt tabs, 3 GUs and figured I would just tough it out. As you can see in the pic, there is quite a lot of exposed ridge there and it was about 75 that day. You can also see in the pic that it drops down 2000' to Stevens Creek. I took off along that ridge for a couple miles and came to a crossroads. I decided to drop down to the creek which was an extremely steep 1.5 miles. Then I hung a left at another trail intersection and ran along the creek for a few miles. At this point, I hadn't seen anyone for a while and running in completely new territory I was starting to feel kinda "out there"... especially being a dude who lives in the city :) Was I going to be able to remember the turns I made on the way back? Was a mountain lion going to try and make me dinner? All of this analysis was taxing my running and then I remembered some wise running wisdom I once heard (or read) "take what the trail offers you". This is good advice for life as well, so I carried on. 5 minutes later I ran up to the creek crossing and one of the most amazing Redwoods groves I have ever seen. I crossed Stevens Creek and ran the 2 miles and 1800 ft up to the ridge at Skyline Blvd. My water conservation was going as best it could which meant I drank most of it already.

I turned around and bombed back down through the redwoods across the creek (forcing myself not to drink any creek water... it was so cold and tempting though) and pushed back up the gently rolling creek side trail to the base of.... the death climb. I saved about 4 ounces of water to drink when I got to the top. I was parched at this point. I started up the hill into the sun trying to run every 50ft or so. Damn that hill was steep. As I was about 2/3 of the way up a turkey vulture started circling me... I yelled up to him (or her), "I'm not dead yet!" and I mustered up some energy to run another five feet :) Deep in thought on the ascent of the death climb I started thinking back to the views of Silicon Valley from the ridge above and then I started thinking of that turkey vulture thinking about how close my proximity to death looked and then it dawned on me, this run would forever be known as The Dot Com Death Run.
1 comment: