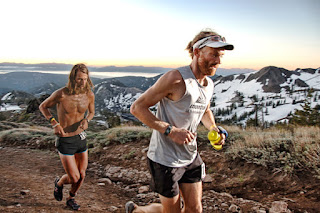 I was fortunate enough (and smart enough to buy a ticket early) to attend the world premier screening of Unbreakable, the documentary of the 2010 Western States Endurance Run. Unbreakable follows (literally) 4 of the worlds top Ultrarunners during what turned out to be one of the most epic ultrarunning races we've seen yet; the 2010 Western States 100 Mile Endurance Run.

In 2010, Geoff Roes, Anton Krupicka, Killian Jornet and Hal Koerner were the talk of the ultrarunning community for their individual accomplishments. Geoff Roes was crushing 100 milers like they were half marathons including the Hurt 100 and Wasatch Front 100. Anton Krupicka was becoming the "poster-runner" of ultrarunning and was undefeated in all of his races including the Leadville 100 and the Miwok 100K. Hal Koerner was the two time defending champ of the race, long time ultrarunner and well known as the owner of Rogue Valley Runners in Ashland, OR. Killian Jornet at the time, was emerging as somewhat of an urban legend type of runner (at least in the US). He had won the Ultra Trail du Mont Blanc twice but hadn't made much of a mark in the US... yet. He was known for being young and fast, really really fast. I think he seemed to be the scariest competitor because he was somewhat of an unknown. If you followed ultrarunning at the time, you knew these guys were going to push themselves to their breaking points. I remember staying home that day and following the race updates online.

I'm grateful that the Director, JB Benna decided to make this film and I hope there will be more films and live coverage of these ultramarathon races in the future. At the screening on Friday, JB had a great quote, he said he made this film because he wanted to see it. The screening was sold out and packed with 300 people, a keg of sierra nevada, a nice crew of recognizable ultrarunners many of whom were competing in the North Face Endurance Challenge Championship the next day and 3 of the four featured runners in the film, Geoff, Anton and Hal who did a Q&A with JB at the end.

The film was excellent. It captured the emotions, high points, low points and beauty of ultrarunning. JB and his crew did a great job of showing how these guys live day-to-day which was interesting as most of us just know them as the guys who are winning races. The cinematography of the race was a fantastic composition of long range shots, running along with the runners (which was surprisingly smooth) and scenic shots which painted a portrait of the environment of the race. The story of Gordy Ainsleigh, the founder of the race, as told by Gordy himself while standing shirtless over the American River Canyon, was woven throughout the film and provided a great background to the race and it's grueling conditions.

Check out the trailer! Here's a link to the screening SCHEDULE.