Running to Strained Calf to Biking to Swimming to Triathlons 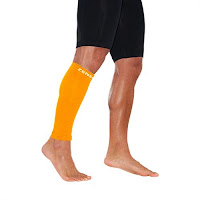 Since pulling my calf in June I have sadly not been able to run much. I am somewhat of a (well actually a big) self "diagnoser" and I definitely made my strain worse than it was when it happened. Numerous times I thought it was healed and I tried to run it out only to limp back home. I tried to find respite in heavy rides on the spin bike and strength training, including my legs, figuring that I could rehab the injury as long as I wasn't running... another bad idea. Finally, I dove into some reading and found that compression and rest would be the best options. So for two solid weeks, I wrapped my calf very tightly and did nothing. That sucked. BUT it worked. Now I am wearing a compression sleeve, swimming and and just started doing some light rehab leg exercises. The unintentional additional exposure to swimming and biking has helped me build a training base to take on some triathlons. I have always had my eye on the Ironman.

Being a runner, triathlons have long been on my radar. My endurance on the bike is pretty solid (for a non-cyclist) and the only struggle is usually with comfort after being on the bike for a long time. So, biking basics, check! ...Meaning, I feel that I have a solid base on the bike from which I can train up from. Since I have been (effectively) rehabbing my calf, I have found swimming... I've been in the pool a few times before but was never able to put the pieces together and really enjoy or get into it. Swimming has always been difficult... most likely because I have never done it consistently until now. Just breathing was tough let alone coordinate the strokes and feeling like I was actually moving properly through the water. Being a self-diagnoser, I am also a self-teacher, so naturally I just struggled my way through the water for the first couple weeks and learned by trial and error and watching others. A few days ago, I found this video:
That video helped me tremendously and now I have the feeling as though I am gliding through the water. I am now more focused than ever on maintaining my swimming and biking endurance and building up to an ironman.