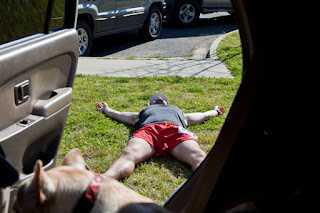 ...and recovering from an ultramarathon. Sometimes the best way to improve is by taking a break, for a bit. Taking a step away, letting something heal, letting something get stronger or gaining perspective can give you the advantage you've been in need of.  In running, this might mean sleeping more, walking more, working on core strength, upper body or doing some lower body rehab and maintenance exercises. During my recovery from the American River 50 Miler I have experienced a side of running that I normally have not focused on too much which is resting and healing without becoming or feeling out of shape. Being my first 50 Miler, my body was particularly shocked by the distance covered in one day and it has been taking longer than I anticipated to heal. Shortly after the race, I was running again but not feeling as if I was making any gains.  The running during the first two weeks after the 50 miler solidified my running endurance and fitness gained from the 50.  However, I still felt sluggish because I was experiencing aches and pains around my knees. These were tendon, ligament and maybe cartilage related issues. Things that required rest to rejuvenate. 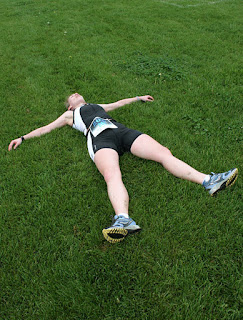 I forced myself to take a week off from running and all exercise.  I still took some nice walks though. The first thing I noticed after a couple days of rest was that I felt strong. After that week, I started small and began running again. I also incorporated more strength/weight training into my routine. The combination of rest, strengthening muscles that I hadn't used much and easing back into running with shorter and mid-range runs has been effective in my recovery process from the ultramarathon (the American River 50 Mile).
1 comment:

aaahhhh Bay to Breakers.... I love Bay to Breakers! (Wikipedia link: B2B)Many people are against it because of all the partying that accompanies it but I think it's awesome. It is a side of running that is rarely seen and a side of San Francisco that is unique to our city and needs to be shared with the world. The important part of Bay to Breakers is the part that falls somewhere in between the elite racers and the back of the pack "party-ers". It is the part made up of real runners dressed up as super-heroes, hot dogs, genies, gorillas, Obama, Jesus, men dressed as women, women as men, men naked, women naked, roman soldiers... 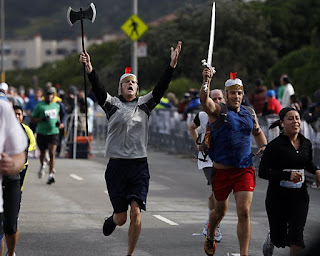 This year I ran it with my friend Jesse. We decided a little late to run it so it was sold out by time we went to register. Being San Francisco Natives we both love the race and wouldn't dream of doing it without dressing up a bit. We are part of the "middle-of-the-packers" that I was referring to. We ran it in a respectable 1:02:and some change. I felt pretty good about our time considering we were carrying swords, wearing plastic helmets and yelling motivating Roman Army cheers along the way... "Onward!!"... "Seize the Hill!!!" (referring to the Hayes Street Hill) ..."Seize the Park!!! (referring to Golden Gate Park) and of course "VICTORY!!!!" as we crossed the finish line. We also posed for a few pics at the requests of fellow runners along the way.

Bay to Breakers is about running (and yes, it has lost some sight of that over the past 10 years), freedom, peace, and celebrating life. It is an awesome expression of life for 70,000 people to come together peacefully, early on a Sunday morning to have an annual tortilla fight at the starting line, then run, hoot, holler, scream, party and celebrate through the streets of San Francisco all the way to the other side of the city. A lot of people in SF only see the partying side of Bay to Breakers, either from the side lines, the news, or from the party itself. They overlook the elite racing (for the most part)... it's not much more special than any other race with regards to the elites. What they miss are the people in the middle. The real runners who dress up and can throw down 7.5 miles at a 7 minute pace in a gorilla suit. That's the beauty of Bay to Breakers. 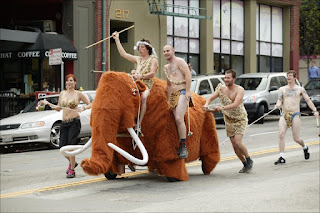 Get your costume here!