Ready for April Marathons!? Check out some of these old race news archives... 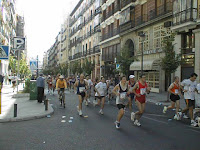 Part of what gets me psyched about running a race is the history behind it and/or the historical significance of that particular race. I get a similar feeling when I go to a rock concert or music festival. Here are some old articles I dug up about some of these marathons. They're pretty cool...
1) Madrid Marathon Re-cap April 1985
2) London Marathon Re-Cap March 1981 (Dick Beardsley)
3) American Wins first Olympic Marathon on American Soil 1904 (St. Louis)
4) Tough Time For Americans in 1900 Paris Marathon
5) "Famous Indian Runner wins Boston" Tom Longboat April 1907 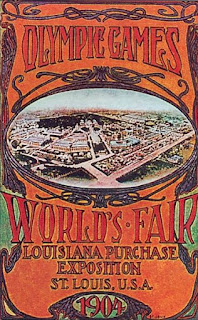 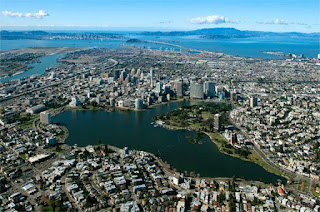 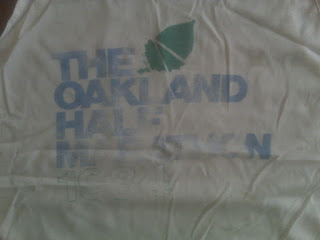 The OAKLAND MARATHON is back and is taking place this Sunday, March 28th! I know that there used to be one in the 80's because my Dad ran it. I'm trying to talk him into letting me sport his 1984 Oakland Half Marathon singlet when I run the half on Sunday... it's pretty cool, see above (pic coming soon... see twitpic to the right for now). On Sunday, there will 1000 people running the full and 3,400 running the half from 37 states and 6 nations. Oakland is an interesting city for a Marathon because of its dynamic reputation and demographic. This quote from the San Francisco Chronicle caught my eye. The race organizers are talking about the Baltimore marathon because it is demographically similar to Oakland... "In Baltimore, when we run through less-than-spectacular areas, crowd support tends to be very large," said Lee Corrigan, president of Corrigan Sports, the promoter of the Oakland Running Festival who also plans the Baltimore run. "It's an expression of civic pride and the whole city turns out to support us." Read the rest of the article HERE. See you all on Sunday! Look out for Undefeated Running stickers! 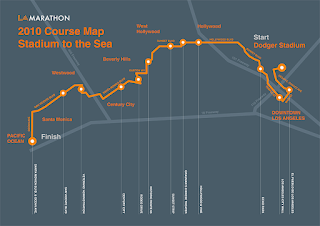 The LA Marathon will be celebrating it's 25th anniversary with a new course, new sponsor (Honda) and a sold out race! It also has one of the coolest RACE POSTERS I've ever seen and it was designed by Shepard Fairey. Who would have thought race posters would become cool like rock concert posters!? Way to go LA Marathon Team and good luck to all runners!!!
No comments: 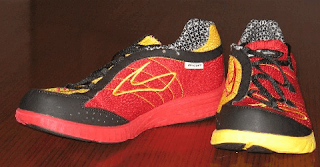 As some of you might know I am running the Big Sur Marathon on April 25th. As most of you don't know, I did not decide on which shoes to wear until last week. Since my recent move into some barefoot style running shoes, The Evo by Vivo Barefoot/Terra Plana, I decided to find some unstructured racing flats (not ready to go 26.2 in barefoot shoes yet). That's when I came across the BROOKS GREEN SILENCE. Staying true to their dedication to making more green products, Brooks launched the Green Silence this February. Every part of the shoe has a green element; soy based inks, their BioMoGo sole which breaks down 50 times quicker than average running shoe soles, plastic bottles make up the laces, gillies, mesh and tongue webbing. The Green Silence has about 48% as many parts as normal running shoes, uses 41% of the energy required and uses half of a liter less oil/pair. Get all the Brooks "Greening Info" in the BROOKS GREEN ROOM.

Not only are they green, these shoes are also exceptional racing flats. They are very light, comfortable (spacious toe-box), breathable, and very flexible. They are also truly neutral and have a minimalist feel. I had an awesome first run in them, 10 fast miles. 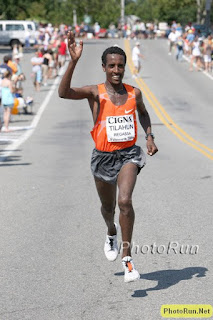 I have been running (seriously) for about 7 years now and when I first started out I felt little connection between myself and other runner's I would see on the road, trail, etc. I did not occur to me that we share quite a bit in common and a smile, nod, or a "hi" might help push us to achieve our respective goals or just brighten our days. Even as I became more involved in the running world I still viewed most other runners as competition. That was until I realized that I am my only competition and You are your only competition! Everyone is out there competing with themselves, we are all united by that. Lately, I have been noticing more runner's acknowledging each other while running and I think it's great. I'm not sure what the reason is, maybe it's just my outlook on things or maybe it is a shift in running culture or consciousness. Certainly, books like Ultramarathon Man (Dean Karnazes) and Born to Run (Chris McDougall) have brought the running community closer together. So has training groups, fundraising efforts, and running blogs! I would also guess that the recession and the rise in diseases has prompted the world (especially the USA) to refocus their attention on being healthy and living an active lifestyle.

This runner's wave business has been a hot topic in the running community lately, check out this RUNNER'S WORLD ARTICLE and even Hal Higdon suggests saying "hi" in his ADVANCED I TRAINING SCHEDULE (see tuesday). See how much the runner's wave means to FATGIRL2FITGIRL.

I also am a big fan of running to MUSIC... yes, it can be an unfair motivator but more importantly music just fits certain moments. However, I have been training more and more without headphones because I have noticed a rise in communication with other runner's and I enjoy getting in tune with nature... It also puts me at an unfair advantage when running through areas with mountain lions and coyotes! In the past month I have had two conversations (each less than 2 minutes) with other runners, i did not know, while on a run. This was pretty cool. So say what's up to someone on your long run this weekend or throw them a smile or a wave.
1 comment:

After reading "the book" aka Born to Run, I was motivated to start running in minimalist running shoes. Growing up in San Francisco we learned that it was dangerous to walk barefoot in parks or even on the beach because of the possibility of stepping on a used syringe. Therefore, running barefoot around the city has been ruled out. Living and running in San Francisco, I have seen many people people wearing the Vibram Five Finger KSO shoes. Unfortunately (or maybe fortunately for me) most stores in SF are sold out of them. I went to REI to try them on they only had the Five Finger Classics. The toe or finger part felt kind of funny but to give Vibram the benefit of the doubt I did not run in them and did not wear them for a long period of time. Before that day, the Vibram Five Fingers were the only true minimalist or barefoot running shoes I could find... until I stumbled across the TERRA PLANA WEBSITE and learned about the introduction of a barefoot running shoe to their line of barefoot or minimalist...  "hanging out?" shoes, the VIVO BAREFOOT "EVO'S". I signed up for their email list to be notified when they released the shoe and two weeks later I received the message and placed the order.

After my first run in them and as I am writing this post, I am sitting here wearing my VIVO BAREFOOT "EVO" Running Shoes by TERRA PLANA. Although the price tag is a little hefty, ($160) these are some awesome shoes by a company that "gets" the benefits of running, walking and being barefoot. They also seem to "get" the environmental thing especially with some of their other, "hanging out" shoes. From the ground up, the Vivo Barefoot EVO's consist of a 4 mm thick sole which is made up of a TPU (thermoplastic polyurethane) abrasion resistant outer sole, a layer of Duratex that is puncture resistant, and a Agion layer inside which is an environmentally and physically friendly odor, bacteria and fungus stopper. The lining of the shoe is made with NatureTex which 50% of is made from recycled plastic bottles. The top of the shoe is made of a light weight mesh material, you can actually see your foot in the shoe. The shoe weighs 8 ounces.

Running in the Vivo Barefoot Evo's was comfortable and extremely close to being barefoot. I ran 5 miles in them and the one problem I had was at the very end of the run the top of one of my toes started to get a little irritated. I suspect this will go away after another run or two. I ran on asphalt and a trail/walking path and the shoes responded great to both terrain types. A portion of the trail was a little more rocky and the shoes were still comfortable. I would anticipate that Evo's would handle great on a more technical trail as well. The icing on the cake... these shoes look infinitely cooler than the Vibram Five Fingers (not that it really matters). If you're new to barefoot or minimalist running it is true that you will need to take some time with the transition period. If you're not a believer about the benefits of running in barefoot or minimalist running shoes read BORN TO RUN and/or watch this video...