Last weekend (April 9, 2011) I ran the AMERICAN RIVER 50 MILE ENDURANCE RUN. It was my first 50 miler and my first "ultramarathon". It was awesome. I loved it. I barely slept the night before. We stayed at the Larkspur Hotel in Sacramento which was a 2 minute drive from the starting line. It was clean, quiet and a great place to stay. My girlfriend/crew was yelling at me all night to sleep (i think i was making her nervous!) but i couldn't stop tossing and turning with anticipation. The unknown of whether or not I could run 50 miles in one go was keeping me awake. My alarm finally went off at 5am. I was a little nervous. I knew i could run 26.2 on little sleep but 50!? Well, I guess we were about to find out. I ate a Core "Warrior" Bar, half of a "Think Thin" protein bar, some brazil nuts and a banana. I chugged about 20oz of H2O as soon as I got outta bed and another 15-20 by the time I arrived at the start; 5:55am. The race started at 6am.

The temperature was in the mid 40's during the start of the race. There was frost on the grass as the sun came up and the river had this beautiful and eerie low fog hovering just above. I decided to keep everything simple for this race. I started out in what I planned on wearing for the whole thing; sleeveless running shirt, shorts, and a bottle with Perpetuem by Hammer Nutrition. No hat, no gloves, no sleeves... looking back, i probably could've gone with a hat or some throw-away gloves but it wasn't too bad.

The first part of the race up until Beale's Point which is about Mile 27 is along a bike path. For the most part, it looks like that (to the right) but there are more runners (pic was taken the day before) and some awesome river views that pop up between the trees as well as some beautiful meadows that happened to be covered in frost that morning (click the pics for larger versions). You definitely feel like you're in civilization throughout this part of the race and I was looking forward to getting to the more "cutty" single track I had been hearing about that winds its way through the bluffs above the river to bring you into Auburn. I felt pretty good throughout the first half of the race. I had little twinges of pain in my knee but nothing too bad and I had flurries of thoughts like, "will I make it 50 miles?" I was able to shake these things off, stick to my fueling plan, and just keep on moving forward. Mile 6 was a tough point when I realized I had 44! more miles to go. My fueling plan was greatly aided by my crew who is my girlfriend, Chrissy Lynn! THANK YOU!!! She met me at all (but the third aid station! It was her first time crewing) the aid stations where I traded the two bottles I was running with for the two bottles she had refilled for me. She is also a PHOTOGRAPHER and took all of these pics! I was running with one 12oz bottle of Perpeteum and one 12oz bottle of H2O the whole time. I am a coffee drinker but held off on drinking any that morning so I could pop some Espresso Clif Shots later in the race (100mg of caffeine!). In addition to the Perpeteum I had an additional GU/hr and some bananas/oranges from the aid stations when it felt appropriate. This plan seemed to work pretty good except I could've used some salt caps. A fellow runner/pacer handed me a couple late in the race and they really wiped out the minor cramping I was experiencing.  I cruised through the marathon mark in 4:28... about where I thought I wanted to be.

After Beal's Point, the amount of runner's that I was sharing the trails with seemed to really thin out. This was nice. We hit some fun single track and were starting to "get out there" on the trail and in the race. I had an emotional moment around mile 30/31 where I realized I was going to make it! I actually got a little choked up. After this point in the run I settled into a groove of pushing onward, having highs and lows, running with familiar faces, having some alone time on the trails, and was truly able to just sink into the occasion and enjoy the environment and experience. I was hurting but feeling great. Here's a pic from the Rattlesnake aid station at mile 41 (which I hit in 8:11). It would take me another 2:10 to go the last 9 miles! 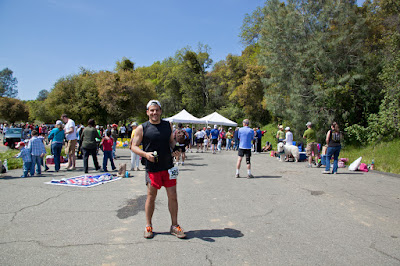 Leaving Rattlesnake I felt great and tried to push onward quickly to break 10hrs but the hills were too much for me this late in the race. I was still happy though knowing even if I had to walk it in I would finish my first ultra! The terrain really began to transition during this part of the race from the central valley of California to the foothills of the Sierra Nevada's. The American River was flowing strong from all of the rain and snow we've had which also left some pretty good muddy patches on the trails. Check out the Elevation Chart:

This is where I really learned what it means to pace yourself in an ultra. If I had gone out at a solid 10:45 or 11min pace I would have had the juice left to power through the second half and easily broken10hrs and probably be even closer to 9hr 30min. I'm looking forward to testing out my pacing discipline at my next Ultramarathon. For a city boy, this all day adventure through the woods was awesome. One of the things that has been motivating me lately is the desire to explore my physical connection with nature. There is something very "stripped down" about being way out there on a run with not much besides yourself to keep you pressing on (I did not run with a pacer). When we got back to the city, Chrissy remarked, "Wow, everything is covered in concrete." After running 50 miles through the country side along a beautiful river I couldn't agree more. 100 Miles through the Sierra Nevada's started to sound like a treat. Here's a finish line crossing I will always remember: 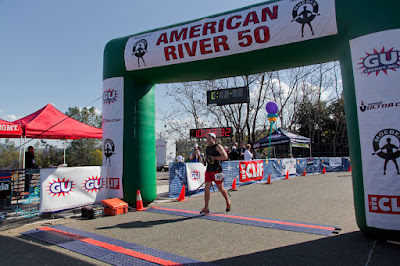 Support the blog and get some gear through these links! Thanks :)