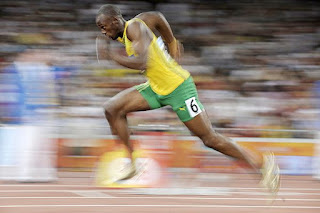 Speed work, it's a grey area in running... but it sure as shit shouldn't be :) The track is more packed than ever these days but its mostly packed with training groups that are either just logging miles and cross training or skimming the surface of speed work. Don't get me wrong there are definitely some serious track clubs out there that some of the best non-professional runners belong to but at least at my track (Kezar Stadium in San Francisco) they are not the majority. So if you're a runner who is logging some serious miles, training for a race or just run for the seek of running, go hit the track and feel the immediate benefits of running as fast as you can.

When was the last time you flat out ran as fast as you could? I'm sure some of you are saying a couple of hours ago but most of you probably can't remember. The number one reason to go out and run as fast as you can is because it feels so good... you don't even need a track! The nice thing about the track is that it makes it easy for you to break your workout into different distances. This is useful if you're training for a particular race... half marathon: run mostly 400s and 800s, full marathon: run 400s, mostly 800s and some mile repeats, ultramarathon: try to stick to the mile repeats while incorporating 100s, 400s and 800s. Whatever you're training for always do the shorter "as fast as you can" distances which would be a 50, 100 or 200. Check this video of Bart Yasso explaining his legendary marathon timing training technique/theory called the Yasso 800s: