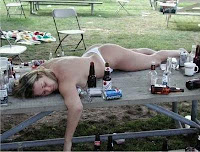 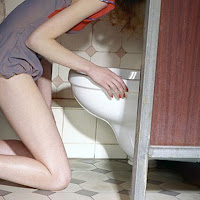 Tested by many. Feared by all... Running with a hangover. Although, if you're passed out the morning after on picnic table in your underwear or praying to the porcelain gods the night before you're probably not gonna make it out for a run... maybe a walk.

At the... "ripe" age of 29 my social life and training life often are often at war. Battles are won and lost and the war will probably never have a true victor. On Friday night the social-life-side prevailed although a valiant effort was put forth from the training-life. They rallied to ensure that I consumed H2O (occasionally) through out the evening and A LOT of H2O just before going to sleep.

I woke up in the morning feeling like I was on mile 22 and didn't stop at enough aid stations. I made myself some "cheesy toast" (soy cheese + butter on Omega 3 bread), coffee, ate a banana and drank about a liter of water. An hour later I was in my running gear and heading out for my 6-mile pace run.

My pace was not stellar and as I was running I started to think if there were ANY benefits of this run. Not only did I clear up some of the blurry moments in my head from the night before, I also realized that running with a hangover is similar to HITTING THE WALL! The causes of most hangovers as well as major factors in hitting the wall are HYPOGLYCEMIA and DEHYDRATION. Here's the actual definition of a HANGOVER.

So obviously, running with a hangover can be dangerous (For the sake of legal things... I DO NOT RECOMMEND IT) but if you're careful it might make your body better at handling the tougher moments of a race... The key is to not over do it because alcohol inhibits your muscle recovery and you will become a weaker runner. Also, if you fuel properly you won't "hit the wall"... unless you're hungover. Happy trails!
1 comment: